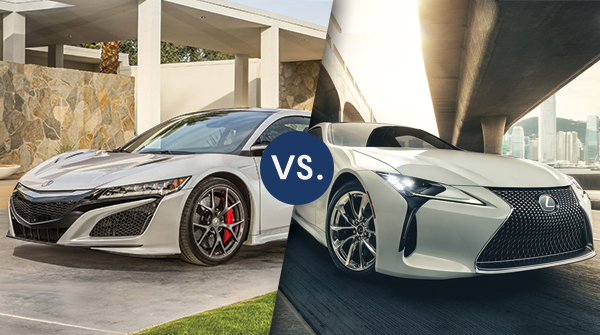 With the introduction of the 2018 LC, Lexus turned heads. While it’s a worthy contender for the Acura NSX, the LC is no supercar. Below, we’ll run down the differences between the 2017 Acura NSX and the 2018 Lexus LC (as well as what’s speculated for the 2019 LC F), so you can make an informed decision.

Sometimes, the only way to tell is to get behind the wheel. After you read our review, we invite you to come to our convenient Middletown location to experience the NSX firsthand.

The 2017 Acura supercar has a Sport Hybrid SH-AWD Power Unit, including a 3.0-liter twin-turbocharged V6 engine and three electric motors. In a stroke of ingenuity, Acura engineers made the front wheels mechanically independent from the rear power unit.

Front wheels are powered by a Twin Motor Unit (consisting of two electric motors) while the rear wheels get their juice from the gasoline engine combined with a Direct Drive Motor. The powertrain is mated to a 9-speed dual-clutch automatic transmission, and makes a head-spinning 573 horsepower and 476 lb-ft of torque. If you plan on taking it to the tracks, you’ll be glad to know the NSX has a top speed of 191 MPH.

The 2018 Lexus LC is available as a gasoline or hybrid model. The LC 500 has a 5.0-liter V8 engine with 10-speed direct-shift automatic transmission, and makes 471 horsepower and 398 lb-ft of torque. The LC has a top speed of 168 MPH. The LC 500h has a 3.5-liter V6 engine with the Lexus Hybrid Drive system and a continuously variable transmission, making a net 354 horsepower.

While a new LC F hasn’t yet been announced, a 2019 model appears likely and it’s widely rumored to be competitive with the NSX. We look forward to that day, but until then, the LC can’t touch the NSX in terms of horsepower.

The 2018 LC comes standard with heated leather seating, and optional with semi-aniline leather and Alcantara headliner.

The Lexus LC is not available with Apple CarPlay or Android Auto – thought to be the gold standards of smartphone integration – but does come standard with Bluetooth tech, Lexus Navigation, Remote Touchpad controls, voice command, and a 12-speaker audio system.

*Prices shown are Acura suggested retail prices only and do not include taxes, license or a destination and handling charge. Actual vehicles/accessory costs, labor and installation vary. Dealers set their own prices. Please consult your selected dealer.