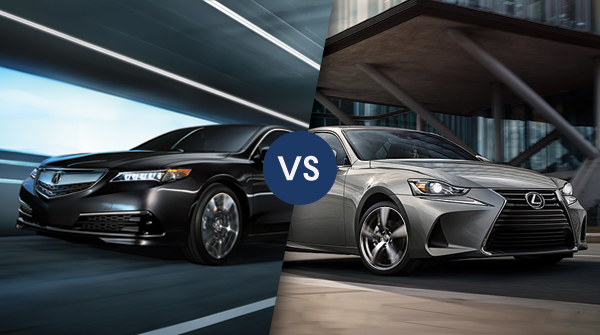 The luxury market, there’s a wide range in terms of value, with some models offering little more than styling at a premium price and others giving you the full package without breaking the bank. When comparing models, make sure you look at the full picture.

In the choice between the 2017 Acura TLX and the 2017 Lexus IS Turbo, it’s clear that both have great styling and reliable reputations. Look a little closer, however, and there are some key differences. Check out our full comparison:

The Lexus IS is not available with remote-operated windows or moonroof (but does feature a power moonroof), active sound control, or an On-Demand Multi-Use Display, and a rear camera and heated front seats are optional only. All models of the IS come standard with SmartAccess with push-button start, dual-zone climate control, NuLuxe interior trim, Lexus Display Audio, Scout GPS Link navigation, Bluetooth technology, and Lexus Remote app.

The 2017 TLX received a best-possible 5-Star Overall rating from the National Highway Traffic Safety Administration*, earning perfect scores across the board. The Insurance Institute for Highway Safety gave it top scores in all tests, except for small overlap front impact, where it received an Acceptable.

While the NHTSA also gave the 2017 IS a 5-Star Overall Rating, it scored just four stars in frontal crash tests. Additionally, the IIHS gave it Good scores for moderate front overlap, side impact, and roof strength, but the model was not evaluated for rear crash and it received an Acceptable rating for small overlap front impact.

The Lexus IS comes standard with driver assistance technology, including a Pre-Collision System, High-Speed Dynamic Radar Cruise Control, and Lane Departure Alert with Steering Assist. It does not feature the ACE rigid body structure, however.