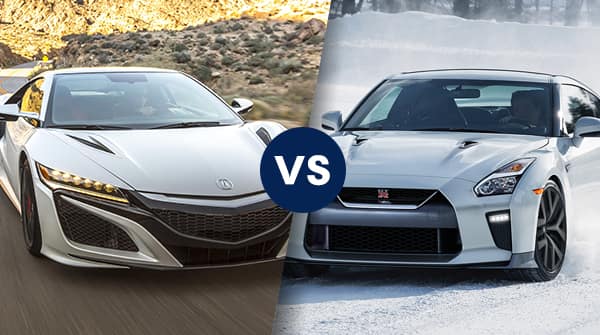 The Acura NSX was named the 2017 Performance Car of the Year by Road and Track, and Kelley Blue Book rated it No. 1 in its class for both horsepower and fuel economy. But because we’re not ones to rest on our laurels, the team at Friendly Acura can tell anything you want to know about how this unique hybrid supercar stacks up to the competition.

In the case of the 2017 Acura NSX and the 2017 Nissan GT-R, you have two highly competitive supercars with futuristic styling and mechanics to match. But which one will save the day? Let’s find out.

Drivers in Middletown are welcome to come get behind the wheel of the NSX, but before you do, read our one-to-one comparison for details:

The biggest differentiator of the NSX is its hybrid powertrain. As hybrid technology has advanced well beyond pure functionality, Acura engineers have taken advantage and built the next-level Sport Hybrid system. It combines a 3.0-liter twin-turbocharged V6 gas engine with three electric motors for optimal performance and fuel economy, mated to a 9-speed dual-clutch automatic transmission. The powertrain makes a combined 573 horsepower and 476 lb-ft of torque, going from zero to 60 in 3 seconds, according to a Road and Track test.

While not exactly the most efficient ride on the road, the NSX gets respectable fuel economy for a supercar thanks to the hybrid system. EPA estimates peg it at 21 MPG city and 22 MPG highway*.

According to EPA estimates, the GT-R gets 16 MPG city and 22 MPG highway.

The GT-R does not come available with the gold standards for smartphone integration, Apple CarPlay or Android Auto. Instead, it has the NissanConnect system with Navigation and Mobile Apps. It also features Sirius XM Traffic and Travel, a RearView Monitor, Bluetooth technology, dual-zone automatic climate control, and HomeLink.

The Nissan supercar has leather-appointed front seats with suede inserts, heated front seats, and the option for Alcantara details.

*2017 EPA mileage based on 2017 EPA mileage ratings. Use for comparison purposes only. Your actual mileage will vary, depending on how you drive and maintain your vehicle, driving conditions, battery pack age/condition (hybrid models only) and other factors.