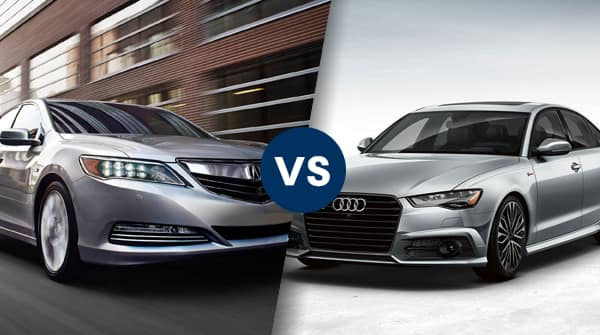 Drivers in Middletown shopping for a new luxury sedan should compare models before purchasing because many upscale automakers inflate their prices simply due to their recognizable name. Acura has had to work a little harder, and it shows when you look closer.

When comparing the 2017 Acura RLX to the 2017 Audi A6, drivers may note that the Audi doesn’t have a hybrid engine and doesn’t come standard with many of the driver assistance technologies you might expect from a luxury car.

Read our side-by-side comparison for more details on how these two luxury sedans stack up:

The 2017 RLX comes with one gasoline engine and one hybrid. The base engine is a 3.5-liter V6 that makes 310 horsepower and 372 lb-ft of torque, mated to a 6-speed automatic transmission. According to EPA estimates, it gets 20 MPG city and 30 MPG highway*.

The 2017 RLX Sport Hybrid is one surprising, fuel-efficient sedan. It comes equipped with a 3.5-liter V6 combined with three electric motors, mated to a 7-speed dual-clutch automatic transmission. The hybrid powertrain makes a net 377 horsepower and 341 lb-ft of torque, thanks to the trio of motors that work in sync to balance power and torque to both axles. The RLX Hybrid gets 29 MPG city and 30 MPG highway*.

The RLX and the A6 have identical safety ratings, with both 2017 models earning the Insurance Institute for Highway Safety’s 2017 Top Safety Pick title, as well as 5-Star Overall Ratings from the National Highway Traffic Safety Administration‡. However, the RLX comes with a more impressive lineup of safety technology.

All models of the 2017 RLX are equipped with the AcuraWatch suite of features, including Adaptive Cruise Control with low-speed follow, Lane Keeping Assist, Road Departure Mitigation, and Collision Mitigation Braking with Head-Up Warning. Each model also has a multi-view rear camera with dynamic gridlines and a blind spot information system.

The 2017 A6 comes standard with Audi pre sense basic, a type of forward collision warning, as well as a parking system with rearview camera. To get the full suite of driver assistance features, you’ll need to upgrade to the Premium Plus trim or higher.

*2017 EPA mileage based on 2017 EPA mileage ratings. Use for comparison purposes only. Your actual mileage will vary, depending on how you drive and maintain your vehicle, driving conditions, battery pack age/condition (hybrid models only) and other factors.