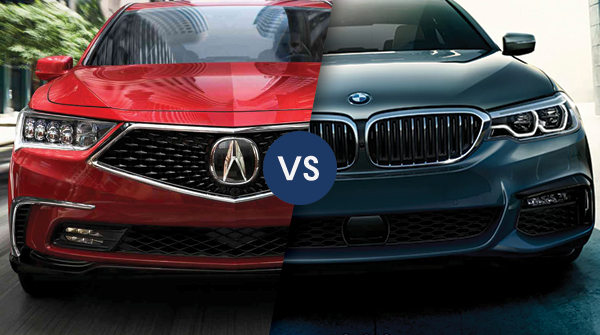 Middletown drivers who want a new luxury sedan often visit Friendly Acura wondering how our models compare to German brands. This is one of our favorite subjects because as the Germans rest on their laurels, Acura steps it up with each new model year.

The 2018 Acura RLX comes standard with a multi-view rear camera with dynamic gridlines, Blind Spot Information System, automatic headlights, Adaptive Cruise Control with low-speed follow, Lane Keeping Assist, Road Departure Mitigation, Collision Mitigation Braking with head-up warning, and Traffic Jam Assist. The latter feature is new and helps you stay centered in your lane a safe distance from the car in front of you while you’re in heavy traffic – a very useful feature for trips to New York City.

The NHTSA has not yet rated the 2018 BMW 5-Series, but the IIHS did award it a 2018 Top Safety Pick+ title. Like the RLX, its crash prevention and mitigation system was rated Superior, but the system does not come standard on any 5-Series models.

The BMW 540i won’t come off the lot equipped with any of the driver assistance tech found standard on the RLX – not even a rearview camera, which is included standard on even economy cars today. But buyers can opt for certain features via one of three Driver Assistance Packages. Available features include Parking Assistant, Head-Up Display, Park Distance Control, a Rear-view Camera, Active Driving Assistant, Parking Assistant Plus, Surround View, and Adaptive Cruise Control with Stop & Go.

The BMW 5-Series does not come available with GPS-linked climate control or active sound control. Additionally, heated front seats and Pandora capability are available as options only.