We have changed our hours, click here to learn more 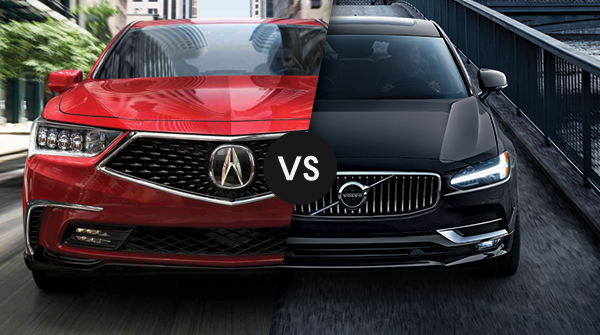 At Friendly Acura, we understand that choosing a new vehicle is a big decision so we have tried to make it a little easier for you. We have compared the 2019 Acura RLX to one of its competitors, the 2019 Volvo S90, so you can see how our model stacks up against the competition.

After reading our review we would love to have you come into our showroom located in Middletown, New York and test drive the 2019 Acura RLX to see for yourself why it stands out among other luxury sedans.

The 2019 Acura RLX is equipped with an engine control system that has the ability to shut down half of the engine’s cylinders, which improves the fuel efficiency of the sedan. The Acura RLX also takes regular unleaded gasoline and has room for 18.5 gallons of fuel. The hybrid model has a 15.1-gallon fuel capacity which allows drivers to go for longer distances before each fill-up.

The 2019 Volvo S90 T5 is the standard offering for the sedan. This model is built out with a 2.0-liter turbo 4 cylinder engine. This set up produces 250 horsepower and 258 lb-ft of torque. The S90 T6 model has a 2.0 liter DOHC 4 cylinder engine, powering the S90 with 316 horsepower and 295 lb-ft of torque. Both of these engines are matched to an 8-speed automatic transmission.

The RLX comes with Acura’s powertrain warranty which covers the RLX for 6 years or 70,000 miles. This warranty fully covers any repair needed on the engine, transmission, axles, joints or driveshafts.